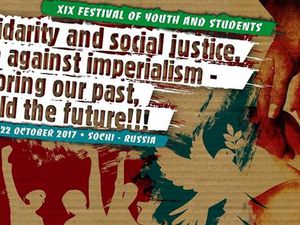 The World Federation of Democratic Youth, the main organizer of every World Festival of Youth and Students including the upcoming 19th WFYS, is declaring that it provides all its efforts to reach the success of the Festival. Considering the historic background of the Festival Movement, the aim is to unite the youth under a common task, the antiimperialist struggle for peace, solidarity and friendship of the peoples. In a world where imperialism seems to be inevitable, it is our task to show the alternative of the struggle, a struggle that reflects the history of WFDY and the reasons that gave birth to our Federation.
The calling of WFDY to the upcoming festival is carried by every member of the Federation and is addressed to the militant and progressive part of the youth. In this international event there is no space for the reactionary, fascist and Zionist forces. The peace in the world cannot be established with any discussion or cooperation with such forces, but on the contrary it can be only achieved through the common action of those youth that they truly share the ideas of the Festival Movement.
On the above ground the HQ of WFDY supported by the International Organizing Committee of the 19th WFYS are responding to some concerns expressed recently regarding the participation of parties with right wing and Zionist expressions from Israel in the upcoming Festival. WFDY and the IOC rejects such participation not only on the ground of their contrary expressions to the Festival ideas, but also on the fact that an NPC already created in Israel by the member organization of WFDY. Therefore, it must be clear that the IOC is rejecting the accreditation of any delegate not included in the delegates’ list of the NPC of Israel created by the member organization of WFDY.
Finally, the HQ of WFDY would like to remind on the responsibility of its members in attending the Festival with the task of promoting the slogan of it: “For Peace, Solidarity and social justice we fight against imperialism – Honoring our past we build the future”.
Comradely Yours
The HQ of WFDY
Moscow, September 27, 2017